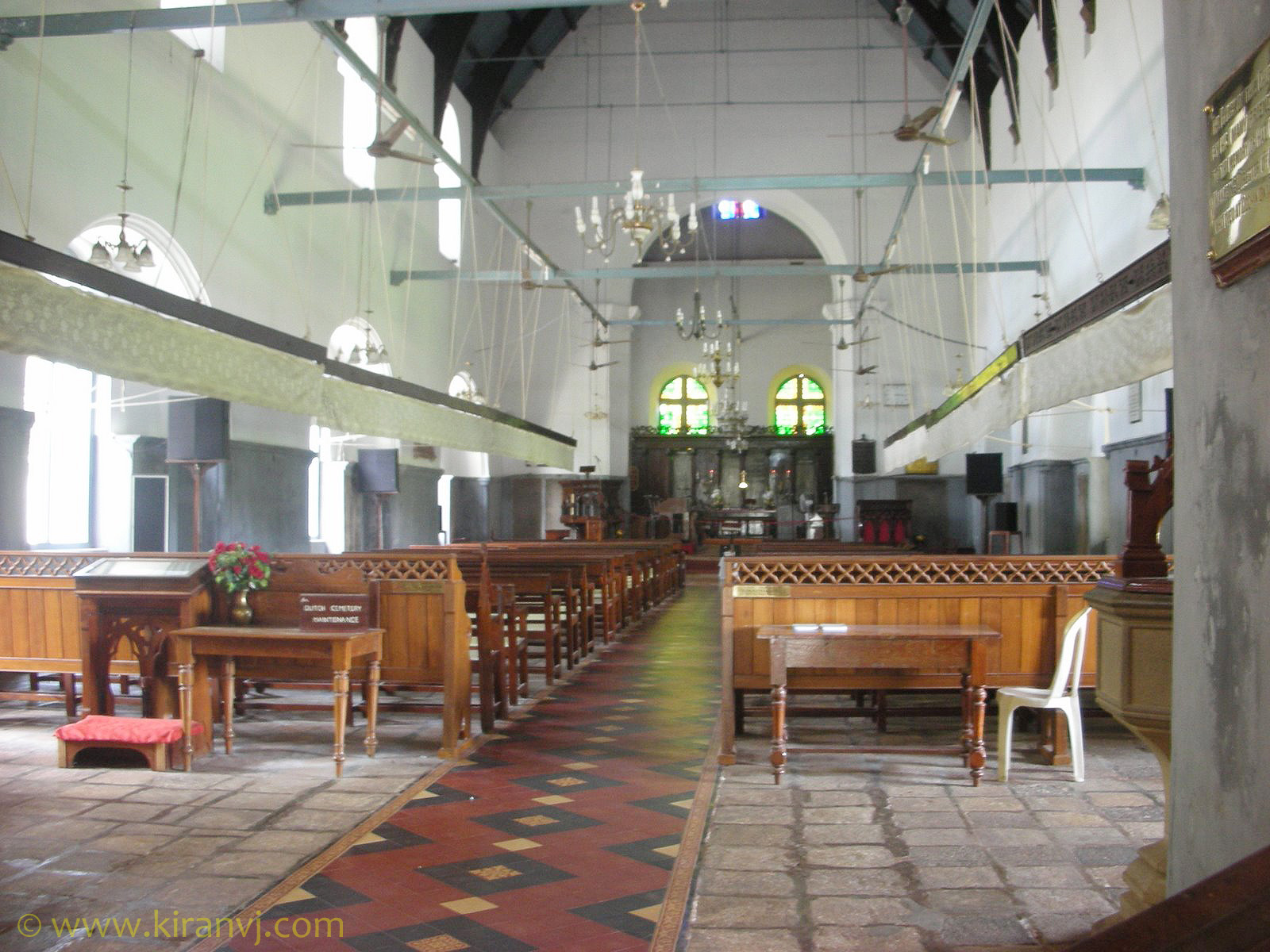 The large sports ground was once used by the colonial powers to conduct their regular military parades and drills. The building around the ground was occupied by the defence establishments.

This stately structure on a small hillock near Parade Ground was built in 1506.It was the residence of the Portuguese Governor and is noted for the beautiful façade with large Gothic arches. It was taken over by the Dome Jos Gomes Ferreira, the 27th Bishop of the Diocese of Cochin whose jurisdiction extended over India, Burma, and Srilanka.

This strategic fort was built in 1503 as a result of the alliance between the Maharaja of Cochin and the Monarch of Portugal. It was reinforced in 1538 and later passed into the hands of Dutch and then the British.Itwas destroyed by the British and today relics of this magnificent structure can be seen along the beach.

The cemetery was consecrated in 1724 and has hundreds of tomb stones of the Europeans. It is an authentic proof to several chapters of colonial

The historic Roman Catholic Church near the St.Francis Church was built by the Portuguese. It was elevated to a Cathedral by Pope Paul IV in 1558.The Church was demolished by the British in 1795, when they captured Cochin. In 1887, a new building was constructed on the same site and was proclaimed a Basilica in 1984 by Pope John Paul II .The church has a rich collection of beautiful paintings.

Vasco home stay is a unique heritage home stay facility with bed and breakfast, in the heart of Fort Cochin. The Vasco House is more than 500 years old and is believed to have been the residence of the famous explorer, Vasco da Gama until his death in 1524.

The picturesque heritage village of Fort Cochin was discovered by the Portuguese explorer. The Portuguese, Dutch and the British have etched their presence on this land. You can see the same in the architecture, cuisine and the lifestyle of this part of the city.

The rooms of Vasco house are large, with high wooden ceiling and large windows opening towards the historic St Francis Church where Vasco da Gama was buried. Two spacious rooms are meant for the guests. Both rooms have 2 double bed and single bed. We provide mosquito net, running hot and cold water, cable TV and for all there services that you can avail from the travel desk below.

This large wooden gate was built in 1740.It faces the parade ground and is adorned with the monogram (VOC) of the Dutch East India Company.

These huge cantilevered fishing nets are the landmark of Malabar Coast. The nets were introduced between 1350 and 1450A.D. by traders from the Court of Kublai Khan in China. The nets set up on teak wood and bamboo poles can be seen along the entire stretch of the coast and are mainly used during the high tide.The system is sufficiently balanced that the weight of a man walking along the main beam is sufficient to cause the net to descend into the sea. The net is left for a short time, possibly just a few minutes, before it is raised by pulling on ropes. The catch is usually modest: a few fish and crustaceans — these may be sold to passers by within minutes.

Affords the best view of these nets. The lovely sight of the nets in the evenings, when the Sun melts down into the waters of Arabian Sea is truly amazing. The square is also a great place to enjoy delightful sea food preparations and tender coconuts.

The beautiful beach extends from Kamalakada to the entrance of Kochi Harbour. Along the beach are many colonial bungalow’s which retain the ambiance of the bygone era.

Ernakulathappan Temple - 5.0 out of 5 based on 1 review 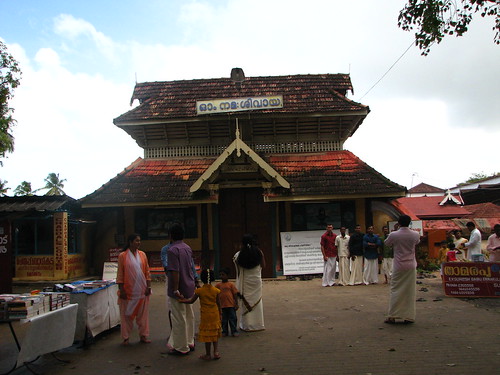 This sacred shrine is situated in the heart of the town, near the Cochin Cultural Centre and the Durbar Hall Ground. According to a legend, the idol here was installed by sage Nagarishi.It is one of the largest temple of the State and the annual temple festival held for eight days during the month of January.

The festival starts with Kodiyettam( hoisting of the temple flag ) on the first day evening. On the seventh day there is Pakalpooram, when the deity is being taken out in procession with caparisoned elephants with Panchavadyam and finally terminating at Durbar Hall Ground after the famous Pandimelam and colourful fire works. On the final day around evening, in a solemn ceremony the flag is lowered and the deity is then taken for the Arattu ( holy bath ) in the nearby temple tank. After that starts the famous Arattu procession with the accompaniment of Panchavadyam.

The procession ends at Durbar Hall Ground. The impressive fireworks then bring the curtain down to this weeklong festival. During all these days Sheeveli is arranged inside the temple and the best available Chendamelam artists are arranged for this. Special poojas connected with this festival are conducted everyday by famous priests from Chennose and Puliyannur Mana.

A variety of cultural programmes are also arranged during these days. Special emphasis is given to promote temple arts like Ottanthuallal, Paatakam, Thayambaka, Kathakali, Classical dances, Classical music concerts, Bhajans etc. Annadanam is also arranged. Thousands of people throng the temple for witnessing these programmes. Watching the Pakalpooram and Arattu processions will be an unforgettable experience for anybody. The adjacent Durbar Hall ground becomes a beehive of activities during the Uthsavom. Various stalls are set up here selling consumer items. Some companies use this festival week to introduce or market their products.

Mangalavanam Bird Sanctury - 5.0 out of 5 based on 1 review

This mangrove forest in the heart of the town is located on the Dr.Salim Ali Road, just behind the High court building. It has a small bird sanctuary, which attracts many migratory birds throughout the year. Mangalavanam is an ecologically responsive area located at the centre of the city of Cochin. It is situated behind the Kerala High Court building. It is a nesting ground for a large variety of migratory birds and supports many types of mangroves. The Managalavanam is often regarded as the "green lung of Kochi", considering its role in keeping the city's air pollution under check. The area is a resting place for many kinds of resident and migratory birds.

St. Francis CSI Church, in Fort Cochin, It was at first built in 1503, is the oldest European church in India[ and has great historical importance as a mute witness to the European colonial fight in the subcontinent. The Portuguese navigator, Vasco da Gama, died in Kochi in 1524 when he was on his third visit to India. His body was originally buried in this church, but after fourteen years his remains were removed to Lisbon. The gravestone of Vasco da Gama can still be seen here. It is on the ground at the southern side. The gravestones of other Portuguese are on the northern sidewall and the Dutch on the southern wall. A cenotaph in memory of the residents of Kochi who fell in the World War I was erected in 1920.